"...und..." is a composition by G. F. Haas that I mentored in 2009 while working at the Experimentalstudio of the SWR. For this piece I created an overtone machine capable of generating drones with 49 partials, in which 49 envelopes and LFOs respectively modulating the dynamic of each of the overtones could be adjusted individually. This instrument was controlled programatically from an Excel spreadsheet driven by a Python application. This environment was used by Haas to synthesise a collection of drones, which we subsequently edited and assembled in order to produce the electronic part that can be heard on this CD. A particularity of "...und..." is that the function of the electronic tape is twofold. On the one hand, it is a layer of the composition that contributes to the total fabric, thus aimed at the audience. On the other hand, the electronic sounds are a tuning aid for the two groups of instrumentalists, who are listening to the tape(s) through monitors on stage. Although the finished piece, "...und...", exclusively relies on pre-recorded materials, controlling the fragile balance between the ensemble and the tape is crucial in order to obtain the sought after interaction between electronic and instrumental overtones. The tape part itself consists of, at times, up to 4 simultaneously overlapping (multichannel) layers, meaning that that the sound projectionist is quite busy during the performance of this piece. Besides this SACD recording of "...und..." I was also in charge of the electronic realization and performance of this piece at the Berliner Philarmonie and the Tonhalle, Zürich. 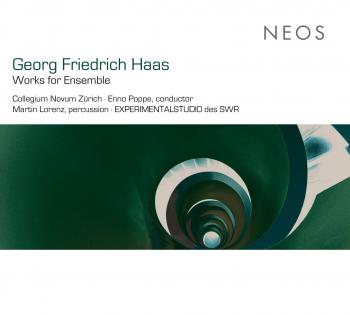